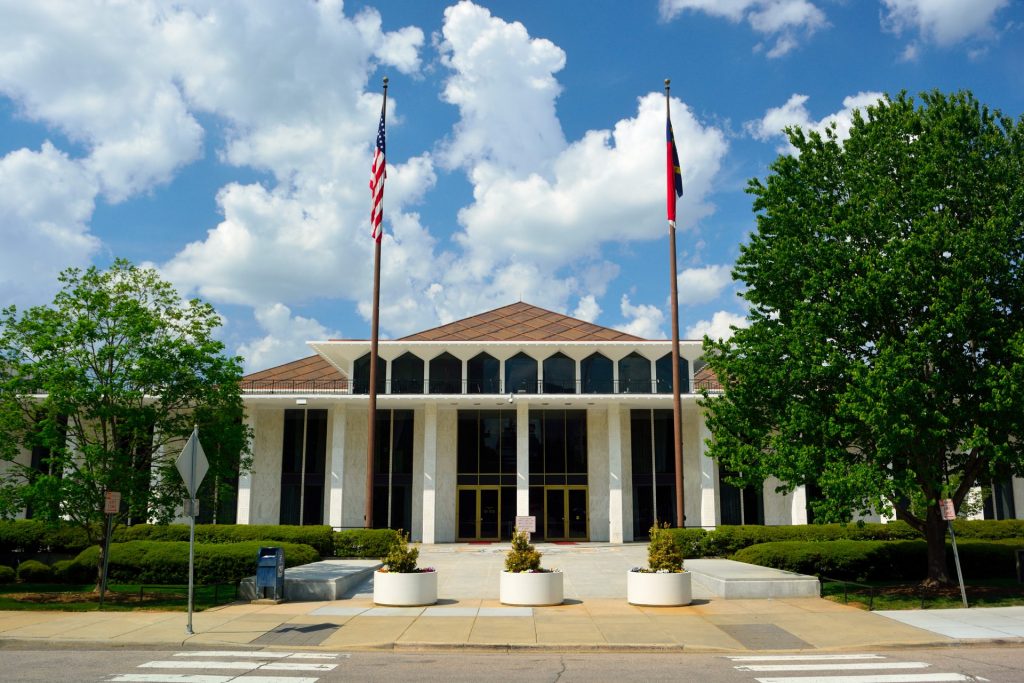 NCBAA is a not-for-profit, professional organization that utilizes the funds provided by Pre-licensing, Continuing Education, and Membership dues to protect and enhance the laws and interest of all Bail Agents. NCBAA funds lobbyists and staff whom are committed to executing NCBAA’s Mission to Protect, Preserve, Promote and Improve our industry and the livelihood of all bondsmen in North Carolina.
Since 1992, NCBAA has successfully promoted, enhanced, and protected the laws and rules which regulation and effect bail agents throughout the state. Below, you will find a majority of NCBAA’s successful legislative actions.

H382 – S.L. 2018 – 120
Technical changes to expiration of CE credits due to biannual renewal. [Section 4.7]
Allows for a bail agent to file a motion to set aside a forfeiture if the defendant is incarcerated on their court date or at anytime between their failure to appear and final judgement date. [Section 6.1.(a)] This section provides that if a bail bondsman locates their defendant incarcerated in a prison or detention center, and the defendant was not served with the outstanding order for arrest, the bondsman can notify the District Attorney (DA) and qualify for the forfeiture to be set aside. The defendant must remain incarcerated for a period of 10 days following notification to the DA.

Allows for the discharge of liability for any deferred judgment on a case.
Changed renewal from one to two years.
Allows for Commissioner to suspend or revoke or not issue a license for having a Federal tax lien.

H762 – S.L. 2013 -139
Allows all licensed bondsmen and runners to post cash bonds, Allows surrender of defendant with a copy of the bond, forfeiture, or release order, Removal clerk from service of forfeiture.

H335 – S.L. 2011-412
Access to AOC ACIS computer system
Absolute set aside of forfeiture if no objection by the twentieth day after the motion is served by the clerk

H650 – S.L. 2011 – 268
Includes a bondsman in the castle doctrine with the authority to enter a home, motor vehicle, or workplace in the lawful performance of his or her official duties in the apprehension of a defendant.

S458 – S.L. 2009 – 536
Have obtained a high school diploma or its equivalent as one of the qualifications to be a bondsman
Even-numbered year’s renewal application and criminal background check
Conviction of a misdemeanor drug violation as a reason to deny or revoke bail bond license

S880 – S.L. 2007 – 105
Allowed forfeiture set aside if defendant is incarcerated anywhere in the United States at the time of failure to appear.

S881 – S.L. 2007 – 228
Included “resident” as one of the definitions in 58-71-1
Required a valid and current North Carolina drivers license or valid North
Carolina identification card issued by the Division of Motor Vehicles as one of the qualifications for a bondsman
Required proof of residency in NC

S1327 – S.L. 2007 – 399
Added the following as reasons to surrender a defendant without return of premium,
(6) Fails to disclose information or provides false information regarding any failure to appear in court, any previous felony convictions within the past 10 years, or any charges pending in any State or federal court.
(7) Knowingly provides the surety with incorrect personal identification or uses a false name or alias.

S846 – S.L. 2006 – 188
Established the Electronic Bondsmen Registry allowing bondsmen free registration of licenses, powers of appointments, powers of attorneys and authorized to sign bonds in all counties in NC

S707 – S.L. 2005 – 240
Provided “due process” to bail bondsmen under Article 3A of Chapter 150B of the General Statutes
Provided for the return of the professional bondsman’s security deposit

S534 – S.L. 1995 – 726
Up to this point all licenses expired annually. Now the license continues in force without expiration until suspended or revoked.

S603 – S.L. 1993 – 234
Required 20 hours of pre-licensing education, 10 hours of continuing education annually.
Exempted a person who was 65 years old and licensed for 15 years from CE requirement.